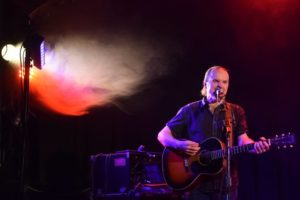 Angelus Theatre Interviews Michael Kelsey — Kelsey will be performing his unique brand of music at the Angelus Theater at 165 N Main Street in Spanish Fork at 7:30 PM on August 25th.  An excerpt from a bio about Kelsey explains that “he is the winner of Guitar Center’s “Guitarmageddon”. Chosen from among 3,000 entrants the singer-songwriter performed at Eric Clapton’s Crossroads 2004 where he shared the stage with many legendary guitarists. Through out a performance Michael may make use of technology, his improv skills, objects in the room, and audience interaction to make music for the ears but more importantly a musical experience for the senses. When Michael brings out the band they perform original material as well as choice cover song selections to connect with the audience in a variety of situations.”

In anticipation of Kelsey’s appearance, we interviewed him, along with long-time friend, Curt Gordon, of Paradox Entertainment, to see what makes this man tick. This is what we learned:

Angelus Theatre (AT): When and why did you start playing?

Michael Kelsey (MK): I was intrigued with the process of making music. Not a particular artist or style of music. I started playing guitar at age ten. The guitar just seemed like the instrument for me. It only has six strings yet so many possibilities for creating songs and feelings. I was a “quiet” kid so the guitar was my connection to the world.

AT: Did you one day have a realization that you had made it as a musician —  that moment when you went, hey – I’m a musician. I earn my living with my guitar.

MK: I just knew that I wanted to spend all of my time doing music, so I would work extra hard to make it work. I would have made any sacrifices to make that happen. I didn’t live in a tent, but if I needed more sacred time to daydream music then I would have had a tent instead of rent.

MK: My skills got better and my business sense got better because I am committing my full energy to it and the outcome becomes better.  A virtuous cycle.

AT: Curt, how did you meet Michael? How did he end up coming from Indiana to Spanish Fork?

Curt Gordon (CG):  I met Michael Kelsey through my friends in the band, “Higher Ground” back in the late 90s. . . . Michael was touring with them at the time. . . . Josh Hall, bassist for Higher Ground, wrote to Michael and talked him into coming out to Utah again on his own. . . . I ran into Josh one day and sincerely, perhaps a bit theatrically, expressed my interest in having Michael perform at Boothe Brothers Theater and Josh granted our wish.

AT: Michael, what is your creative process?

MK: I am always finding ways to feel inspired. Most of the time it has nothing to do with music. It could be a great documentary that I am watching or a great conversation I am having with another soul or simply being awake and observing the world around me as it is happening. Nothing to do with music yet that state of mind is fertile ground for growing something.

AT: Do you have a favorite song that you’ve written?

MK:I would say I appreciate the songs that feel completely me. The tunes that wrote themselves. “A Bus in Motion” is one of those tunes.

AT:How is it that you can make up songs on the fly?

MK: When I first started making a living playing music I was having a weekly gig at the same venue. It was relaxed enough so that I could experiment more just to change it up week to week. I was learning to improvise songs in a low key situation where I could make plenty of mistakes and the mistakes were still fun. And then like anything I got better at it with practice.

AT: What advice do you give to up-and-coming guitarists?

MK: Whenever I see someone perform I can usually see what their “thing” is rather quickly. Sometimes it is the lyrics, technical ability, emotional performance, maybe the way they tell stories and connect between the songs, maybe the way they move when they perform their songs, maybe just their mission behind their music. I tell them to recognize what their “thing” is and build around that. Performing flawlessly is not something unique. You will have to work 100 times harder to sell “ordinary” and that will burn you out. I say find and focus on your unique contribution. It won’t be in the polished areas;the character is in the cracks.

AT: Curt, how has Michael inspired you as a musician?

CG: I used to think of music as notes, chords and rhythm. So when I would play music I would be consciously thinking about those things in order to create the music through my hands. The first time I experienced Michael Kelsey in concert I had more of a spiritual experience that led me on a spontaneous and open path.

I don’t believe that Michael ever plays a song the same way twice. When you think about it, music is one of the only art forms that changes entirely and is totally unique with each and every performance. When you paint a portrait you have that physical portrait. . . . When you play a song, unless you’ve recorded it, it was an energy that spontaneously happened once in the present time. Sometimes with the right combination of vibration that comes from every soul in the room through the performer it can be a life-changing experience as it was for me the first time I experienced Michael Kelsey.

AT: What are your core values as a musician?

MK:I strive to be in the moment and authentic to the song/performance. If I had to play “Mary had a little lamb” you better believe I am going to find my connection to that song and make you see that the fleece IS white as snow as if it is the first time you heard it. I am not saying that makes it better for the listener but I would feel the experience is cheapened if I didn’t approach it that way. I don’t always hit the level I am aiming for but as long as I am trying then all is well.

AT: Thank you, Michael for sharing. We’re excited to hear your show unfold!